For some days, Rakhal [later, Swami Brahmananda], could not meditate properly. Sri Ramakrishna noticed this and asked him the reason. Rakhal answered: “I do not always get the inspiration. My heart seems dry, and I feel an emptiness.” 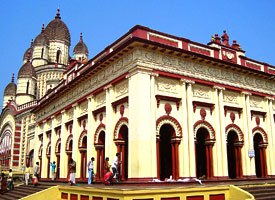 Sri Ramakrishna told him: “You must never neglect your meditation on that account. Make up your mind to practice spiritual disciplines. Then the enthusiasm will come naturally. Those who are farmers by birth and occupation do not and cannot give up farming just because the crops fail. So you must not give up meditation even though you may not get any apparent results. You must be regular in your practice.”

That same day, Sri Ramakrishna went as usual to worship in the temple. Rakhal followed him and sat down to meditate in the hall facing the shrine. Suddenly he saw the shrine grow strangely luminous. The illumination increased in strength until it was as bright as the sun itself, but mellow, not dazzling. This light began to pour through the door of the shrine and seemed about to engulf Rakhal. He was on the verge of losing consciousness. The sensation frightened him. He got up and went out.

Later, Sri Ramakrishna found him sitting silently in his room. “Why did you run away?” the Master asked him. “You complain that your heart is dry and you don’t have any more spiritual visions. Yet you are afraid to experience anything. That is not right.”

A few days after this, Rakhal was sitting absorbed in meditation in the hall of the temple and experiencing an ecstatic joy. Sri Ramakrishna approached him in ecstasy and gave him a special mantra for his own use. ‘Look, there is your chosen Ideal,’ said the Master. Instantly, Rakhal, in an ecstatic state, saw his Chocen Ideal or Ishta Devata standing before him, living and luminous, with a smile playing on his lips. When Rakhal regained his external consciousness and saw Sri Ramakrishna, he prostrated at his feet with loving devotion. He had known and experienced the divine power and grace of his guru. Rakhal once more became absorbed in deep meditation.