India Should Never be A Secular State

[Selections from the excellent article by the venerable ninth President of the Ramakrishna Math and Mission, published in Vedanta Kesari in 1949, soon after Independence. Please note that the word “Secular”means “not being dharmika or religious, and not what its present-day connotation is. “Secular”means “godless”.]

Vedanta and not “secularism” should be the “religion” of the State. Not just of the Indian State, but of any State. This is what the venerable Swamiji wrote soon after India’s independence, when Indian constitution was being made. If only India had heeded to his great advice, India would be different by now.  Had it been “WE, THE PEOPLE OF INDIA, having solemnly resolved to constitute India into a SOVEREIGN VEDANTIC  REPUBLIC “, India would have been different.

With the independence of our country,  many problems, political and other, are exercising the minds of our leaders. Among them not the least important is the question of India’s being a secular or any other kind of State. It is being repeatedly declred from the highest quarters that India will be a secular State.  The reason adduced for this decision is that in that case the State can advance unhampered by the communal troubles that any admixture of religion in politics is calculated to bring in its train. Of course they are at pains to point out that in a secular State it is not meant to stifle any religion, but that the sole purpose of making the State non-religious is to give equal opportunities to all. Everyone will admit that the motive is all right, and considering the state of development of religions in most countries, the position may hold good. 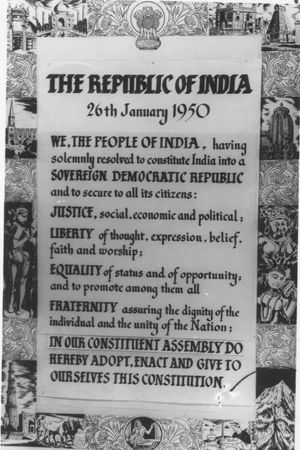 However, in a country like India, which from time immemorial has been primarily religious, such a choice may prove altogether disastrous. For no nation can live, much less thrive, if it goes counter to the main current of its lifestream. As Swami Vivekananda has time and again said, India’s main function, the rationale of her life, is ‘the spiritualisation of the human race, ‘ — ‘the regeneration of man the brute into man the God.’  She has played this role effectively in the past, and, through the Lord’s grace, she is goiong to do so again.

The word religion is a bugbear to many because of the excesses committed in the past in its name in different countries, not excluding India. But does the remedy lie in going to the opposite extreme and banning religion from nation-building undertakings? ….Religious influences of the right type should permeate the life of every citizen; the earlier the better. It is high time for our leaders to ponder on the subject.

The individual is essentialy a spiritual being. However much he or she may be preoccupied with physical concerns, catering for these alone cannot satisfy his inner cravings. It is only in the lower stages of evolution of the human mind that creature comforts play an all-important part. Higher up in the scale, things that make for peace of mind have the upperhand. A cultured man would rather have mental peace with poverty than restlessness with wealth. …Hence for every country the goal must be clearly set according to the characteristic trend and potentiality.

If we reflect for a  moment on why there is so much conflict in the world, we shall find that it is mostly due to too much stress being laid on the material side of life, such as comforts, power, fame, and all else that brings these things. And since these are limited in the world, there is keen competition for them, often leading to mortal wars. As a result of this the world has ceased to be a place for decent people to live in. The way out is just the opposite. Instead of apotheosising matter, we should strive to proceed through it to the Spirit. It is here that religions come in. Of course there are religions and religions. … If the word religion frightens us by evoking ugly memories, let us substitute the word spirituality. Human beings, society, nation–all must hve a spiritual outlook to thrive and manifest the best that is in them. This is the truth that is too often lost sight of.

In the words of Swami Vivekananda, “Truth does not pay homnage to any society, ancient or modern. Society must pay homage to truth or die!’

Fortunately in Vedanta India has just the “religion” which will solve not only her own problems but those of other countries too. Unity in diversity is the theme of Vedanta. The whole universe, including the human being, is essentially one, not merely on the physical plane, as science is demonstrating today, but on the spiritual plane also. Everything is spirit. We are all the Atman. Mind and matter are just our dress, inner and outer. ….As the mind and body are to the human Atman, so are the worlds of mind and matter to the Universal Atman–the Principle we call God.  The supreme merit of Vedanta is this that it is singularly free from the disadvantages we usually associate with religion.  For unline any other religion, it is the synthesis of all religions. It has a place in the world for all, literally all, because according to it every being, and everything, is a manifestation of the Divine, nothing less than that. Hence the Vedantic conception of life safeguards the interest of every community and section of people, for it believes that the parts of a society or nation are, like the parts of a tree, integrally connected with one another. They constitute the society or nation. Vedanta, too, recognises differences, but these are not fundamental, but only on the surface, analogous to the waves of the ocean.

Hence there is nothing to be afraid of in the Vedantic principle of oneness being applied to all spheres of life. Rather it is exactly what the strife-torn world needs today to heal its wounds. Keeping in view the particular goal of each country, and with ‘help and not fight’as its motto, it will give scope to every individual and group to realize their highest potentalities. Is it not the best way to ensure the common good of humanity? And India can begin the experiment right now, with sincerity and steadfastness. The minorities have nothing to fear from an application of the assimilative principles of Vedanta. For, as Swami Vifvekananda put it, there should be equal opportunities for all; and if any distinction is to be made, it should be in favour of the underprivileged.

We are hearing a good deal about communism nowadays. … It is a perverse philosophy that leads communists to believe, or pretend to believe, that they can bring about peace on earth by sowing the seeds of dissension everywhere. To gain true and lasting well-being, the means too, must be as pure as the end. We cannot wash dirt with dirt.  Certain moral principles are universal  in their application. Virtues such as non-injury, truthfulness, non-covetousness and chastity belong to this category. No human or nation can live or grow without observing them to the best of its ability. A nation is great in proportion as it posses

ses men and women who have dedicated themselves to the cultivation of these virtues. And there is a valid re

ason for this: in helping others, we help ourselves, and in hurting them we only hurt ourselves, because we are all spiritually one.  It is the Vedantic conception of the oneness of existence that truly explains the utilitarian standpoint. So it is not communism, but Vedanta, that will ultimately solve the world’s problems.

About wars and weapons, it will do nobody good if the wealth and energy of different nations are frittered away in the wholly needless task of piling up destructive weapons of amazing power. The way out of the menacing cataclycsm lies in their trying to understand the wholesomeness of the Vedantic truths and adopting them as the common views of life for all nations. India can take the lead and show the way, for it is on her soil that Vedanta has flourished. It will be a sorry spectacle if she, too, copying the West, chalks out a wholly secular programme of national regeneration, as she seems intent on doing.

If our leaders appreciate the wonderful synthesising power of Vedanta and apply it to meet the different pressing problems that confront us, it will pave the way for a lasting peace. To us it seems that free India has nothing to lose, but on the contrary everything to gain, by treading the ancient yet supremely efficacious path of Vedanta s lived and taught by Sri Ramakrishna and his disciple, Swami Vivekananda. Our political constitution, our education, our social structure, our foreign policy, our home life, all should be framed on the Vedantic outlook of spiritual oneness. Thus alone will India fulfil her destiny. 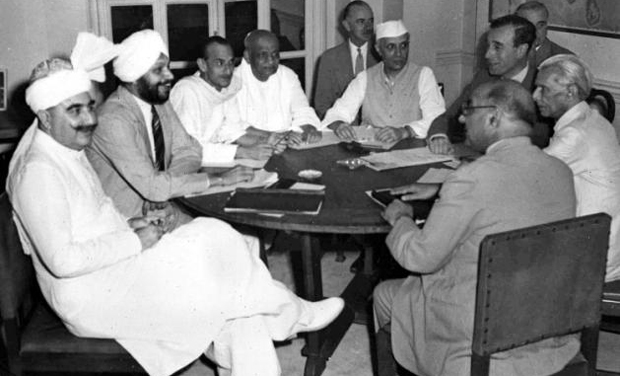